Interested in how large your Irish Wolfhound might grow up to be? Type their age and current weight into the calculator below, and we’ll provide you with a growth chart and estimated adult weight. 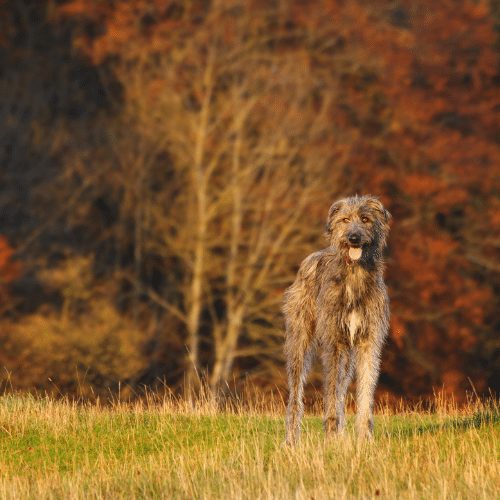 How big will my Irish Wolfhound get?

Irish Wolfhounds are known for being quite large. Males are typically larger than females. On average, they stand at 34 to 35 inches and weigh 140 to 180 pounds. Females are slightly slammer at 32 to 34 inches and 115 to 140 pounds.

There are larger and smaller dogs on each side of the spectrum. Females can weigh as little as 105 pounds, but most do fall within the average.

Large variations in size are relatively common, even within the same litter. It isn’t odd for some very small puppies to be in each litter, as well as some very large puppies. The overall size of the dog is determined by many genetics, so it isn’t as simple as direct inheritance. Just because the parents are larger doesn’t necessarily mean that the puppies will be too. 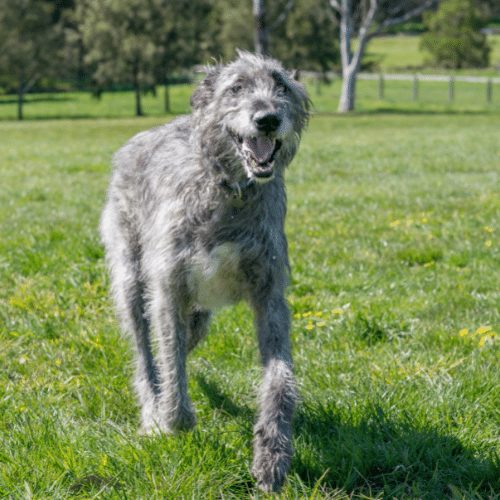 What does a 4-month Irish Wolfhound weigh?

At four months, the size difference between males and females is already obvious. Males typically reach about 24 to 25.5 inches and weigh anywhere from 82 to 45 pounds. On the other hand, females usually measure at 23.8 to 24.5 inches and weigh 69 to 52 pounds.

As you can tell, there are some significant differences between sizes, even at this age. When puppies are first born, their size isn’t necessarily an indication of how big they will be as an adult. Before they are born, a puppy’s growth is largely determined by their placement in the uterus, which plays a role in the sort of nutrition that they receive. Therefore, when they are first born, this is the main factor in their size.

After their birth, their genetics start to play the main role, though nutrition can also be a factor. (Puppies that don’t eat enough are going to have stunted growth, for instance.) By the time the puppies are 4 months old, they have been growing based on genes for long enough to get some idea of their adult weight. At this point, larger dogs will remain larger, while smaller ones will likely remain smaller.

How big is a 6-month-old Irish Wolfhound?

Irish Wolfhounds grow a lot in the first six months. At this point, dogs will almost be their full height, though they will still have a few inches to grow over the next few years. In terms of weight, dogs will still have quite a few pounds to grow. Some may even double their weight from this point forward. However, because much of their height has been reached, they may look somewhat skinnier than their adult counterparts.

This is normal and shouldn’t be cause for concern. They just tend to reach their height before they start gaining muscles and fat.

When is an Irish Wolfhound fully grown?

Much of their 2nd year is spend gaining muscle mass and fat. They will often bulk up quite a bit and reach their full weight at around 3-years-old. Females often finish growing before males, as they are smaller overall.

How fast does an Irish Wolfhound grow?

These dogs grow extremely fast. They start out at only a pound or so at birth. However, they grow extremely rapidly from birth to about six months of age. During this time, they can eat just as much food as an adult might, simply because they must put on so many pounds in such a short period of time. By one month, these dogs weigh about 8 pounds. That is eight times bigger than their starting weight in only a month – and much of that was gained on their mother’s milk alone.

At eight weeks, they’ll weigh about 23 pounds, and their weight only starts increasing from there. Because this is extremely fast growth requires extra attention, care and knowledge on the breeder’s part, Irish Wolfhounds are also quite expensive dogs.

While these dogs grow very quickly, they actually mature slower than most other breeds. For this reason, puppies usually aren’t placed in homes until they are 12 weeks old, which is equivalent developmentally to the eight weeks that is recommended with most other breeds.

Furthermore, your Irish Wolfhound can act very puppy-like until they are 3.5 years old. This is due to their slower development and longer growth period. Expect to deal with a slightly rambunctious puppy for years before the dog settles down.

Is the Irish Wolfhound the biggest dog in the world?

In terms of height, this is one of the largest breeds in the world. However, there are many breeds that are bulkier and weigh more than an Irish Wolfhound. For instance, the English mastiff will easily outweigh this canine.  Therefore, it largely depends on what you mean by “biggest” and what measurement you’re using.

With that said, these dogs are one of the fastest growing dog breeds, putting on more pounds per week than practically any other dog out there. They also need the most calories when growing for this reason, which means that their owners often spend a lot feeding them.