Poodles are famous for their timelessly elegant, beautiful coats. If you’re a new owner of a Poodle pup, you’re probably aware that in a few months’ time, those luscious locks are going to take a lot of maintenance, but when should you start cutting their hair?

You will need to start trimming your Poodle’s coat when they’re 5-6 months old, but it’s best to start doing it at 2-3 months to get them used to it, as it’s going to be a regular occurrence! If you don’t want to trim their whole coat just yet, try doing the tricky areas like the face and feet. This will be good practice for later on – for both of you! 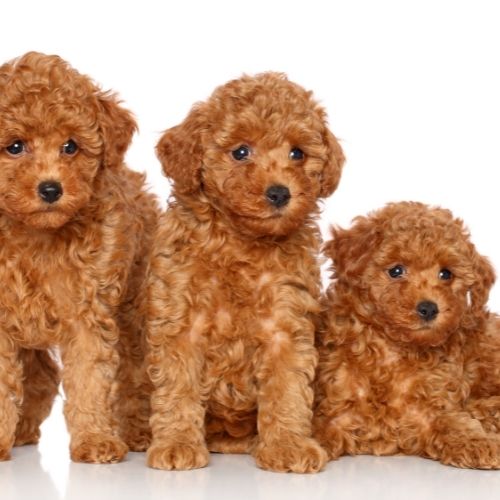 Do I have to cut my Poodle puppy’s hair?

Yes, haircuts are essential for Poodles. Their thick, long, curly coats are prone to tangling and trapping debris. Without regular grooming to keep it clean and tidy, this can lead to poor hygiene and matting, which can be painful and hazardous to your dog’s health. So, it’s important to keep their coats healthy with regular brushing, baths, and haircuts.

When will my Poodle puppy need haircuts?

Poodle puppies are born with coats that are softer, shorter, and don’t require much maintenance. Then, at around four months old, they will shed their puppy coats and start to grow out their rougher adult coats. Within a month or two, they’ll need regular haircuts to keep their coats in tip-top condition. 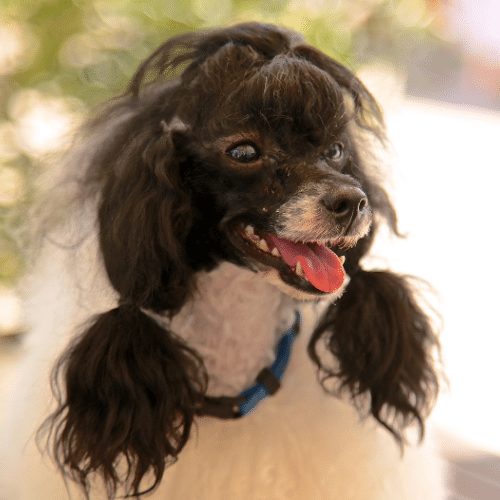 As a general rule, Poodles should have their coats clipped every 6-8 weeks once their adult coats grow out, whatever your desired length. This is because they grow so quickly and can become matted just as fast!

Should I cut my Poodle’s hair myself?

It’s best to leave it to a professional groomer, but if you would rather trim your Poodle’s coat yourself, you absolutely can, so long as you do your research and buy the right equipment. If you’d rather have a groomer do it, look up local groomers online and be sure to look at their reviews before choosing one for your pup.

What equipment should I use?

If you’re going to cut your Poodle’s hair at home, a good pair of dog clippers are usually enough, but you may also want a pair of grooming scissors for touch-ups and tricky areas. Let’s take a look at the different types of scissors and clippers and which ones may be best for your Poodle pup. 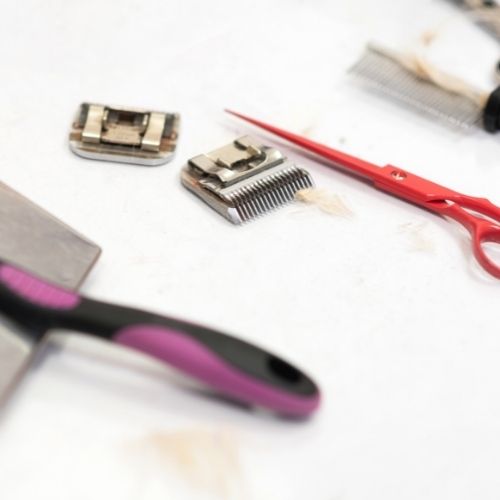 If you’re going to use scissors to trim your Poodle pup’s coat, be sure to use scissors intended for dog hair, as they’re not quite as sharp, and the majority of them have balled or rounded tips for safety.

There are three main types of dog grooming scissors; straight scissors, curved scissors, and thinning shears, and they all perform slightly differently. Straight grooming scissors are a multi-task tool, they have straight blades for general, basic grooming, creating straight lines in the coat, and adding the finishing touches to haircuts.

Curved dog grooming shear has a curved blade that can be used to fine-tune and shape specific areas of the coat, such as the paws and hindquarters. Thinning shears have a cutting edge on one blade and teeth on the other, and there are also double thinners that have teeth on both blades. They are designed to remove lots of hair in even sections for a natural finish, and they can also be used to blend out the harsh lines from clippers and texturize the coat. 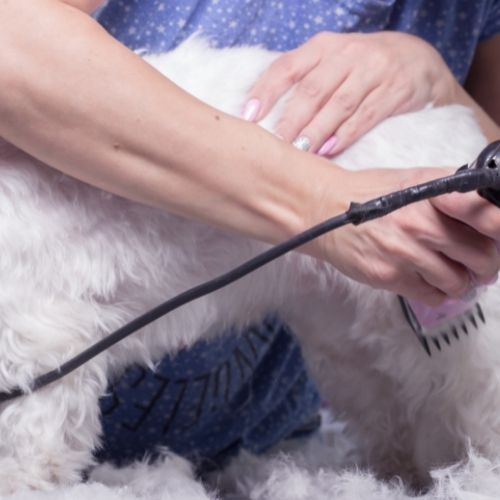 The type of clippers you need to buy for your Poodle will largely depend on how much grooming you’re planning on doing yourself. It’s important that you use clippers designed for dogs rather than human clippers, as the blades aren’t quite as sharp and they tend to be quieter for your dog’s comfort.

If you’re planning on doing all of your Poodle’s grooming at home, you should invest in a pair of professional-standard clippers that come with different blades and attachments for different areas of the coat. Or, if you just need something for the occasional touch-up between visits to the groomer, a simple pair of electrical motor clippers will do just fine.

Electric motor clippers are also good for keeping short coats short. Pivot motor clippers are better for Poodles with slightly longer coats, as they are a little more powerful, and if you like to keep their coat really long, you’ll need a pair of rotary motor pet clippers.

You should also be aware of the types of blades that come with clippers. The higher the number of the blade, the more hair that it will remove. Or, you can get guards that fit a single blade to customize the length, which is a lot more convenient.

How to cut a Poodle puppy’s coat for the first time?

When you cut your pup’s hair for the first time, take it slow and try to make it a fun experience. It’s going to be an ongoing thing, so it’s important that they don’t have any bad experiences early on!

Start by showing them the equipment and getting them used to the sight and sound of it before you cut any hair. Reward them just for being around it and then try cutting a small section of hair. If they react well, reward them again, and then do another section. Keep rewarding them as you go and again after the haircut is finished.

Make sure your dog’s coat is clean and dry before trimming and brush it through to make it easier to cut. Do it in a well-lit, comfortable part of the home that your pup can stand up in. It may be easier if it’s on a raised surface, like a table, and you may want to put something down beneath your dog to catch the loose hair and make cleaning up easier. If your pup won’t stay still, ask a family member to help you. Once you get them into a routine – keep it up! 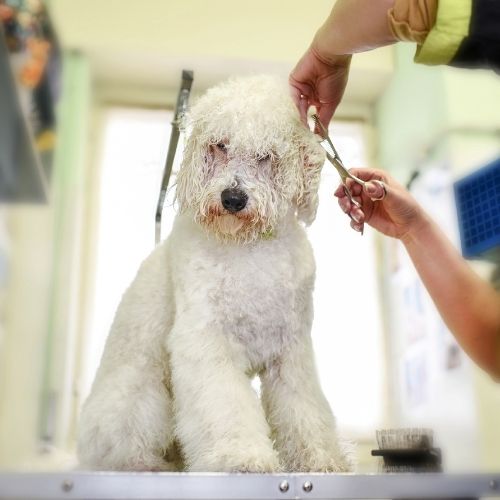 If you’re using scissors, point your scissors in the direction of hair growth when cutting, and remove small amounts with quick snips. Work your way down the legs first, then from the neck to the hindquarters, or vice versa, and then the tail. Take care with the feet, underside, and head, shielding their eyes from falling fur.

If you’re using clippers, hold them against the fur with firm pressure and cut following the direction of hair growth. Use long strokes and go from the neck down to the back legs. It’s best to do one side of the body first and then the other to keep it symmetrical and don’t go too fast or you’ll leave lines in the fur.

How to deal with grooming anxiety

If your pup is afraid of the scissors or clippers, take it really slowly and try to make it an enjoyable experience. You can do this by breaking up the haircut into smaller sessions to make it less stressful and taking breaks in between each one.

Give your dog lots of praise and a reward every time you take a break and ask another family member to comfort them during the haircut. If you’re using a clipper, you could also look into clippers that are designed to make less noise for sensitive pets. 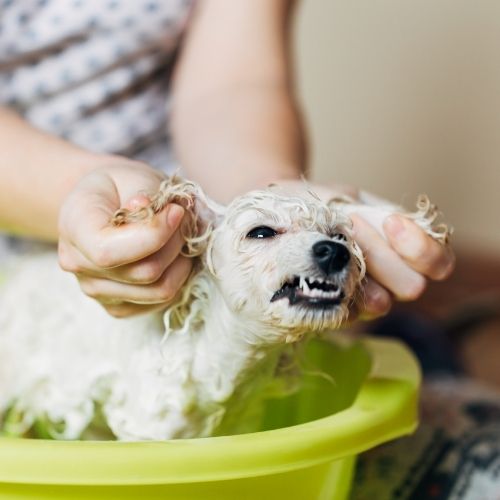 When should you brush a Poodle puppy’s hair?

You can start brushing your Poodle from any age. They won’t desperately need it on a regular basis until their adult coats grow in, but the earlier you start, the better, as they’re going to need it 2-3 times per week, if not daily, depending on the length of their coat.

When your Poodle’s fully grown, you’ll need a slicker brush with fine pins to remove knots and tangles, but for puppies, a softer pin brush will do just fine. To brush them, simply go in the direction of hair growth using short strokes. Hold the fur at the base with your free hand to remove knots, and use a mat remover for any stubborn mats. 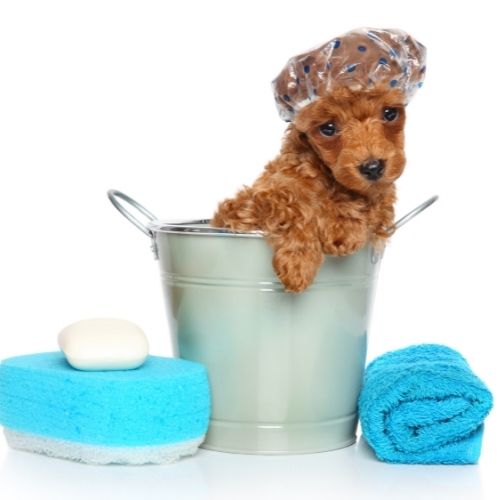 As for bathing, you should give your Poodle pup their first proper bath at 4-5 months old to help them shed their puppy coat, unless they get seriously dirty before that. However, you can give your pup a bath any time after 8-10 weeks of age to get them used to the sensation, but avoid overbathing them, as this will strip the fur of its natural oils and make it dry and brittle.

Once they have their adult coats, your Poodle pup will need a bath once a month. You should use a PH-balanced shampoo for dogs (or puppies), to avoid upsetting their skin, and it’s best to use one with a natural formula without harsh chemicals or soaps. You can even buy shampoo that is designed especially for Poodle coats.

To give your Poodle a bath, lather up their wet fur with the shampoo, massage it in, leave it for as long as directed on the bottle, and rinse thoroughly. Follow up with conditioner if necessary.

Grooming is a big part of Poodle ownership, but don’t be intimidated! So long as you understand what needs to be done and you get them into a routine as early as possible, it shouldn’t be anything to stress over. 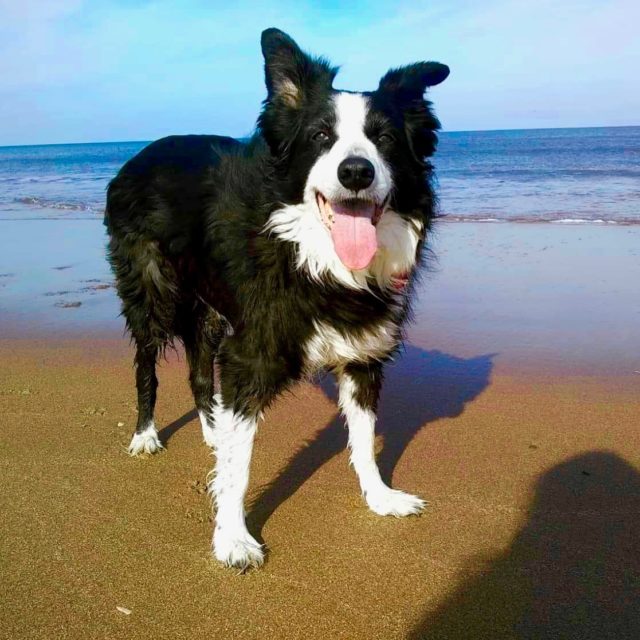 Healthy Summer Treats That Are Safe for Your Dog 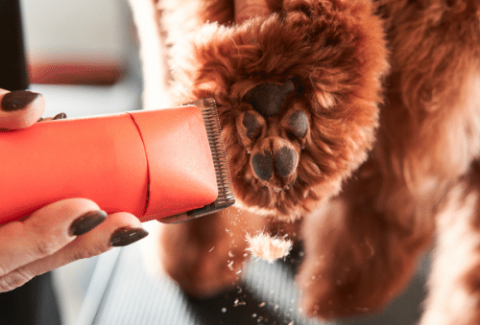 How long does it take to groom a dog? 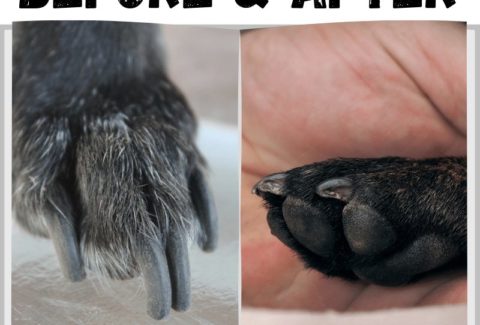 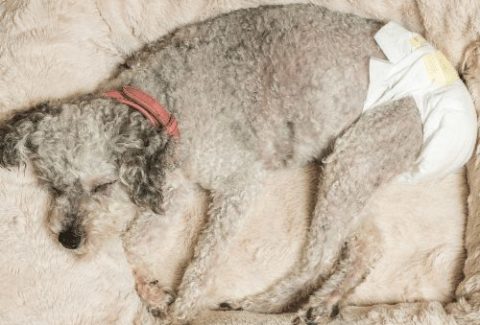 The Best Diapers For Dogs In Heat 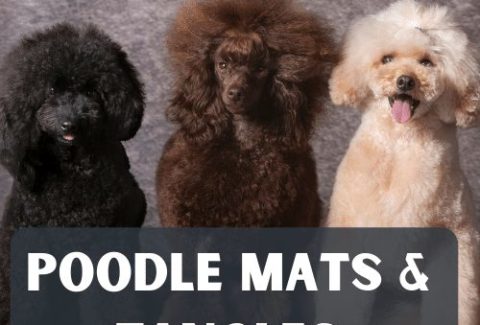 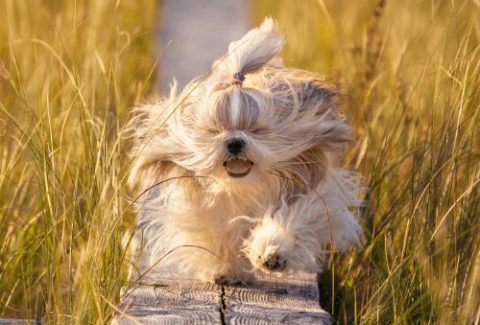 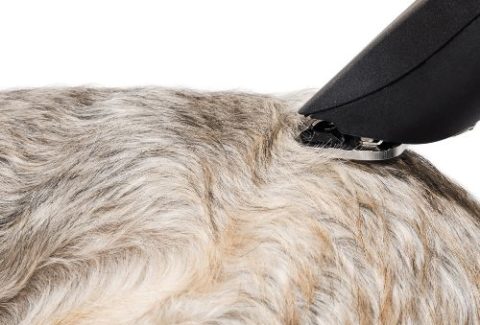 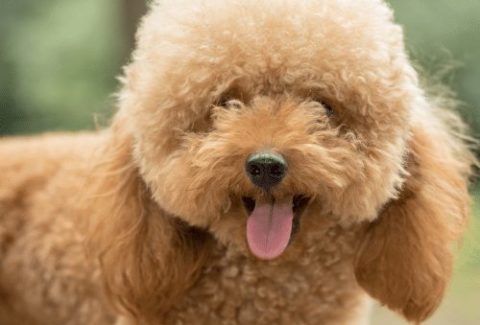