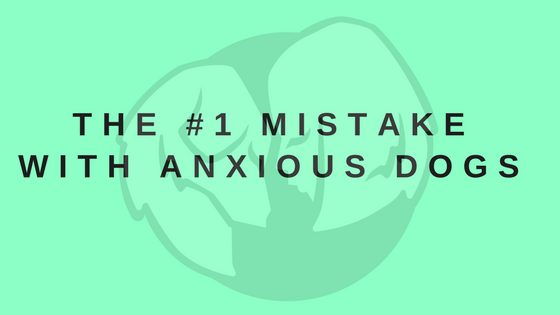 Many dogs are anxious around people. Some only around “scary” people – the ones who are tall, wear hats and sunglasses or talk in a deep voice. Other dogs are generally distrusting of all strangers, no matter their looks. Having visitors come over or greeting another person on the street during your walk many become a challenge.

Owners are determined to helped their dogs overcome their anxiety, and unfortunately often do the one thing that is not only not helpful, but can enhance the dog’s fear.

In order to understand what is going on in your dog’s mind a little better, let’s look at what happens if a fearful dog encounters the thing that sets off his nervousness.

Usually there has been an event in the past that somehow set off the dog’s fear. Sometimes we remember the day on which our dog was first scared by a person – perhaps some constructions workers were louder than the dog liked, or a he got attacked by another dog and linked that to the presence of people.

More often however we do not recall the specific situation that instilled the fear in our dog. It can happen by several factors adding up – maybe your adolescent dog was just going through a fear period, had a bad day on which he was not feeling so well and then appearance of your neighbor at his door set him off.

Now, a new connection is formed in his brain. It is an unfortunate connection that can make life much more complicated going forward. The person has now become a trigger – something that sets off a fear response in the dog’s body. The next time your dog sees a person, nothing scary actually has to happen. The dog’s body will be flooded with stress hormones as soon as the person appears, and your dog will feel uneasy, uncomfortable, stressed and scared.

Once your dog is at a certain level of stressed (also called the threshold), it becomes impossible for him to make good experiences. He cannot learn “This man looked scary but didn’t hurt me, so I guess he is not that bad.” Instead, all he can remember is the fear he felt and the next time he will be even more stressed.

It is very important to understand that your dog doesn’t actually have to experience anything bad once this initial conditioning happened. He will feel scared as soon as he is exposed to his trigger. This will manifest itself in the dog barking growling, tucking his tail, running away etc.

The #1 approach to fixing a dog who is scared of people is to have those people feed the dog treats. I see it all the time – it happens at the vet, at the park, at dog shows, at feed stores that you can take your dog into etc.

It does see like a sensible idea. If our dog eats a treat from the person who scares him, then that will show him that this person is actually good, correct?

Unfortunately, this does not work for all anxious dogs.

If you have a dog whose level of fear is high enough – higher than the threshold – he will feel pushed way out of his comfort zone to go and eat a treat from the scary person’s hand. If he is hungry (or the treat is delicious) enough, your dog may go for it and take it from the person’s hand.
However, what happens in his mind is not going to work in our favor.

If he is on a stress level that is higher than his threshold, and pushed towards his trigger, his brain all be unable to save this new memory of “I ate a treat from a scary person and he wasn’t that scary”. Instead, all the brain is able to save is the recollection of the stress and fear he felt, and your dog may actually become more fearful.

When we put our dog in a situation like this, where he needs to approach a stranger further than he would like in order to take a treat, we are actually asking him to evaluate his fear – Are you scared enough to not take the treat? Do you want the treat enough to push past the discomfort?

Asking our dogs to take a treat from a distance so close that it scares them is putting them into a spot where they will think very carefully about their fear and be very aware of their stress. That will not help us make them less scared! 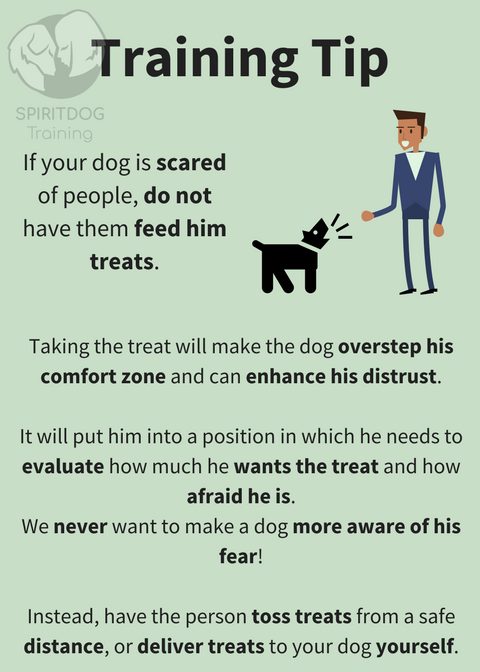 ​​Here is what you can do instead:

That is ok, we need to start somewhere.

100ft, 200ft, even 400ft; if you start at a point where he is comfortable you will be able to gradually work your way up to a point at which you can be very close.

Make sure that your dog will not be approached by anyone in a way that could set him back and enhance his fear again. You could position yourself at a distance next to a farmer’s market, or at the corner of a large parking lot.

If your dog is only a little afraid and anxious and can be in the general vicinity of the people he is afraid of, you can ask them to throw treats in his direction, or (later) to drop them on the ground. That way he will be able to associate the strangers with the positivity of the food, without being forced to approach them closer than he would like to.

After training like this for some time, it is very likely that your dog will in fact not only be able, but happily willing to take treats from the hands of others.

The important thing to keep in mind is that he needs to feel safe. It is hard for us to look inside his mind and be able to tell exactly how stressed our dog is, and whether he may be able to take the additional stress of coming up close to eat a treat from the trigger’s hand.

Occasionally a dog may fall into this magic spot where his fear is just low enough that the approach of having a person feed him will work and help rehabilitate him. These cases however are much less common than the ones in which the dog is far too stressed to remember the situation as a good (and not an additional scary) experience.

Make your dog feel safe, and do not push him outside of his comfort zone – this will only be detrimental. Instead, gradually increase his comfort zone through positive experiences until he is able to do things he used to be very scared of, but that now are no problem because of the slow and consistent happy experiences he made.

Check out: Why it is Impossible to Reward Fear 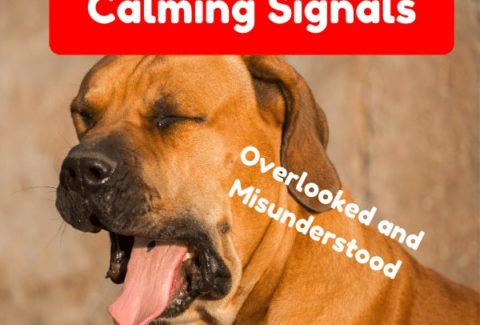 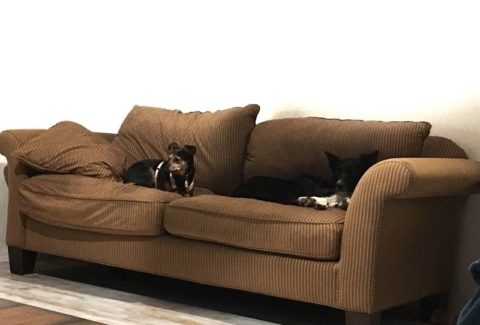 A Holiday From Fear 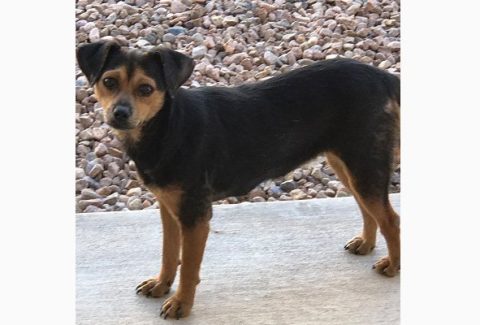 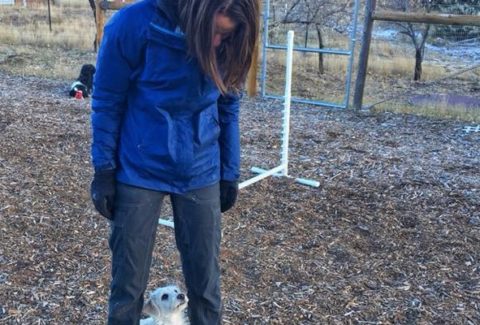 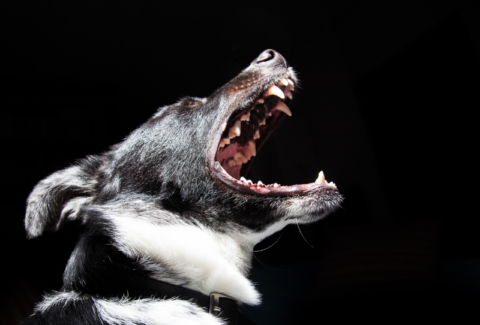 Reactive Dog Training: Tips To Help Your Dog Get Better