Standard Schnauzers are placed firmly into the medium-sized category. However, they do vary in weight. Type your Schnauzer’s weight and age into the calculator below, and we’ll predict their adult weight and provide you with an estimated growth chart. 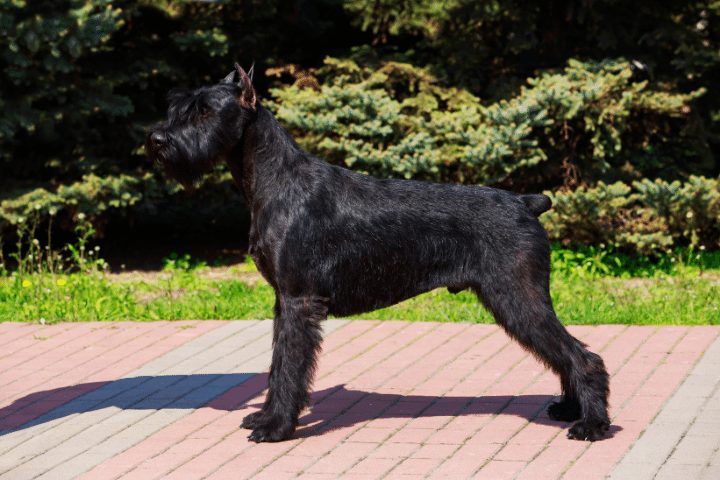 How big will my Standard Schnauzer get?

The Standard Schnauzer was bred as a farm dog in Germany. They are absolutely working dogs and their physique shows this. Males and females have a slight size difference. This difference is not as obvious as it is with other breeds. Some females are still quite large, and males can be smaller than you might expect.

The average male weighs 35 to 50 pounds and stands at a high of 18.5 to 19.5 inches. Females weigh slightly less than 30 to 45 pounds and stand at around 17.5 to 18.5 inches. As you can tell, it is possible for a male to weigh less than a female. However, males will almost always stand a bit taller than females. The difference can be so slight that it is nearly impossible to tell the genders of two dogs based on their height alone, though.

It is possible for dogs to fall outside of these norms, though it is rare. They will be unable to compete in dog shows, as they must fall within the breed standard to do so. They still make great companions, though – even if they are somewhat smaller or larger than normal.

Some female standards are not much larger than Miniature Schanuzers. These two breeds seem to overlap a bit. Don’t expect your dog to be bigger than a Miniature Schnauzer, especially if they are a female. 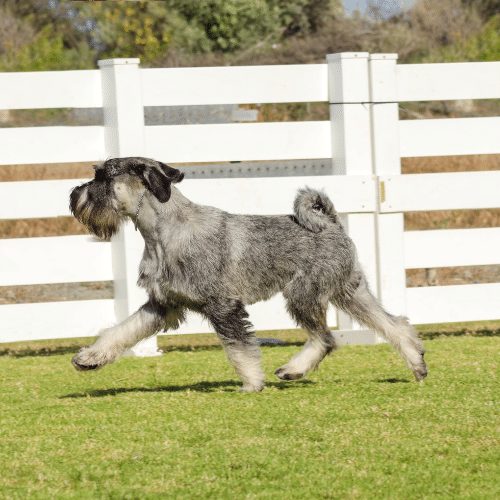 What does a 4-month Standard Schnauzer weigh?

At 4 months, the typical Standard Schnauzer is about half the size of their adult weight. That means males can weigh anywhere from 17.5 to 25 pounds, while females will be a bit smaller at 15 to 22.5 pounds. This is a rough estimate. It is normal for puppies to fall outside of this range, and it doesn’t necessarily mean that anything is wrong.

All puppies grow at their own rate. Some may be smaller at four months, but may hit a growth spurt and gain a considerable amount of weight. It isn’t odd for puppies to grow on their own schedule. Most do not grow along some predetermined curve.

With that said, predicting a dog’s adult weight is typically pretty easy at four months of age. At this point, the puppy has been growing independently for some time. Smaller dogs are likely to stay on the smaller side, while large dogs will probably stay large.

Your puppy’s growth will probably slow down at this point. However, their growth will likely continue at a significant rate until at least six months.

How big is a 6-month-old Standard Schnauzer?

At six months, a Standard Schnauzer should be approaching their adult weight. Their growth will slow down a lot after the 6-month mark. Just because they are close to their adult weight doesn’t mean they’ll reach it any time soon. Many puppies go from gaining pounds a week to only a few pounds a month after this point.

Based on rough calculations, most female Schnauzers will weigh from 22.5 to 38.25 pounds. Males will be slightly larger at 26.25 to 42.5 pounds. Once again, smaller dogs are likely to stay smaller, while larger dogs will stay larger. No matter their size, most dogs will only gain a few more pounds until they are full-grown, though this will take a few months.

Many dogs may be close to their adult height at this point, but many will need some significant bulking up. It isn’t odd for a puppy at this age to be somewhat on the skinnier side. If you are particularly concerned about your pet’s weight, contact your vet.

When is a Standard Schnauzer fully grown?

Most will be fully grown at about a year old. At this point, they will have reached their adult weight or be very close. Some may still need to gain some muscle mass and fat, but most will largely be settling into their adult size.

Dogs tend to grow at their own rate, though. Some small females may reach their adult size far before they turn a year, while some males may still be gaining fat and muscle until they reach 1.5 years. Your dog will stop growing when they stop growing, even if it isn’t on this particular schedule.

It is important to remember that there is quite a bit of overlap between Miniature and Standard Schnauzers. For this reason, dogs in the Standard distinction may not actually be much larger than a mini.

How fast do Schnauzers grow?

Most Schnauzers grow pretty fast. They go from only a pound or so at birth to nearly their full adult weight in six months. That means they’re sometimes gaining a pound or so every week. That is quite fast considering their small size! However, compared to some other breeds, they don’t grow that fast. Many larger breeds grow quite a bit faster.

While these may not be the fastest-growing dogs, it sure seems like they’re growing fast when they go from little puppies to nearly adult dogs in six months.

Your dog will likely grow at its own rate as well. It isn’t odd for puppies to not gain weight for a week and then gain a lot of weight the next week. The measurements in this article are simply a guideline. Don’t expect your puppy to grow exactly along the growth curve. They may gain a pound a week on average, but that doesn’t necessarily mean that they’re gaining that much every week.