Miniature Schnauzers are much smaller than their bigger cousins, the Standard Schnauzers. However, they often get larger than many people expect, despite the word “miniature” in their name. If you’re interested in how big your puppy might get, enter their weight and age into the calculator below. 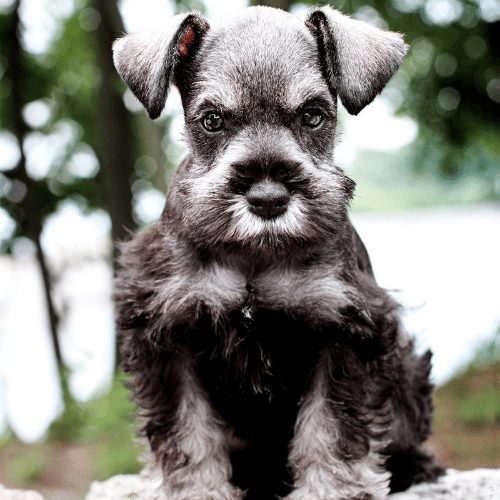 How big will my Miniature Schnauzer get?

Miniature Schnauzers were bred specifically to be smaller versions of the larger Schnauzer, which is quite a bit dog. They typically reach somewhere between 12 to 14 inches while weighing about 11 to 20 inches. Despite their smaller size, they are extremely sturdy, unlike many of the other toy dogs out there. There is not a significant size difference between males and females. A dog can fall at the bottom or top of the spectrum, no matter their size.

A dog’s overall weight is determined mostly by genes. Nutrition can play a role. However, you can’t make a dog be bigger or smaller based on what you feed them. It is possible for a dog to be underweight if not fed appropriately. A lack of nutrition can stunt their growth and make them smaller than they would be if fed correctly. Obviously, it is not recommended to feed your dog less in the hopes that they might be smaller. 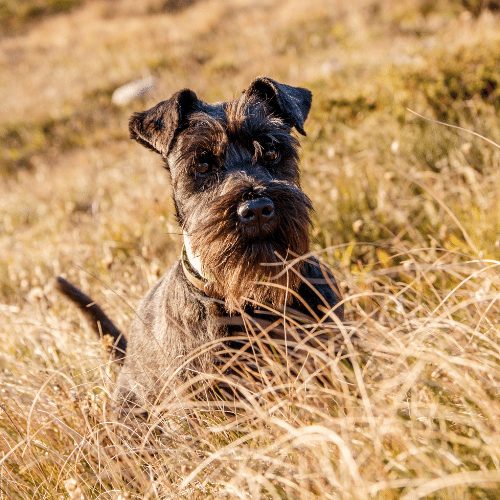 What does a 4-month Miniature Schnauzer weigh?

Schnauzers grow significant amounts in the first few months of life. In fact, they grow extremely fast after birth and slow down their growth as they get older. A newborn mini Schnauzer weighs about 4 to 9 ounces. However, they will double their weight a few times before they reach four months.

It is pretty easy to guess what your dog’s adult weight will be at this point. Our calculator can help make an accurate prediction as to what your dog’s adult weight may be. Of course, this only applies to puppies that have been growing at a healthy weight. Those with underlying health conditions that cause them to grow slower will likely not line up with other puppies.

How big is a 6-month-old Miniature Schnauzer?

At six months old, a Miniature Schnauzer should be around 75% to 85% of their adult weight. Many will weigh anywhere from 8 to 17 pounds. As you can see, this is a huge range. Those on the smaller end will likely grow quite a bit more. However, those on the upper end will be nearly their adult size at this point and will likely not grow much at all.

All puppies grow at their own rate, which is why the range is so wide at this point. You can expect smaller puppies to have a growth spurt soon and nearly reach at least 11 pounds within the next six months. Larger puppies will likely only gain another pound or two – if anything.

When is a Miniature Schnauzer fully grown?

Most dogs are done growing by a year old. Most will only gain a few pounds during their last few months of growth. Many will reach their full height at around 10 to 12 months of age. However, they may need to gain some extra muscle and fat before they have reached their full adult weight. Some dogs may appear a bit skinny for a bit, especially if most of their calories seem to go toward height gain and not muscle mass. However, most will even out before 16 months.

While you can accurately predict your dog’s final adult weight at around four months, some dogs do surprise us. Some have a final growth spurt that sends them over what we were originally expecting, while others stop growing before we would have guessed. For this reason, we do not recommend focusing solely on the numbers on the scale or what you thought your dog’s size was going to be. Instead, keep an eye on their body condition when determining if they are a healthy weight or not.

If you have any questions about your dog’s weight, visit your vet.

How big is a newborn Miniature Schnauzer?

When these dogs are first born, they weigh from 4 to 9 ounces usually. It is important to note that a puppy’s size at birth isn’t a predictor of how big they will get later. A dog’s growth while in the womb is based on their placement. Some puppies get better nutrition from others and will therefore be born larger.

On the other hand, all puppies get about the same nutrition after birth. Therefore, their growth is based more on genetics. The runt will likely not stay the runt, especially if their genes have coded for a larger dog. The largest puppy probably won’t stay the largest puppy for very long. Smaller puppies will quickly gain the few ounces they need to catch up to their littermates.

It takes a few months of growing based on their genetics to determine which dogs are going to be large and which are going to be small. By 4 months, you will have a more accurate determination of how big or small a puppy might be.