If you’ve recently adopted a Miniature Australian Shepherd, you’re likely wondering how much your puppy may weigh as an adult. Type in their current age and weight into the table below to get an estimate on their adult weight and a potential growth chart. 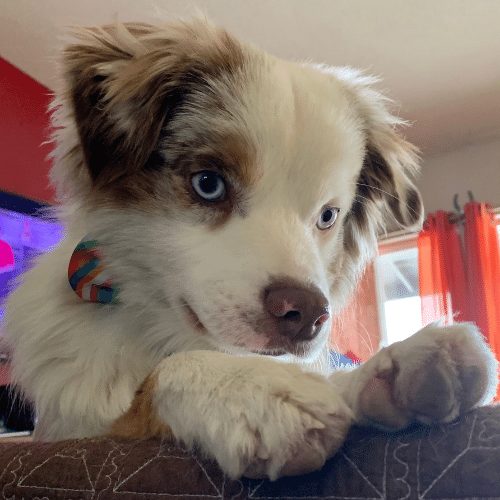 How big will my Miniature Australian Shepherd get?

Most Miniature Australian Shepherds will weigh about 30-40 pounds. They are considered small-to-medium dogs for this reason. There isn’t a significant difference in size between males and females. Instead, the differences seem to be solely genetic.

However, because these dogs are fairly new, their weight can vary considerably. It isn’t rare to find much smaller dogs that are only 20-pounds or so, which puts them nearly in the toy category. Some can weigh as much as 60 pounds, though, which technically doesn’t really make them “miniature.”

At this point, this breed has a very large genetic pool. That makes them significantly healthier than most dog breeds, as they aren’t as likely to inherit genetic diseases. This also means that their size and physical characteristics can vary much more than other breeds can. 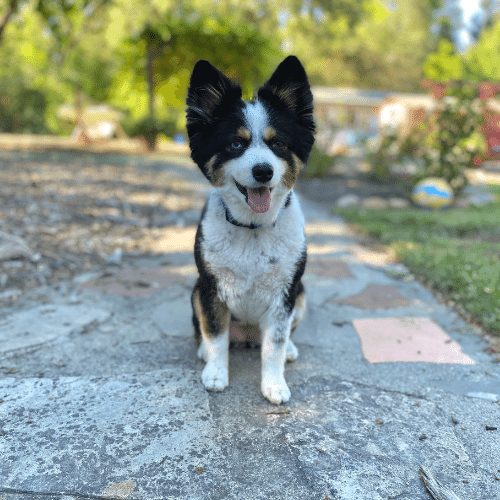 What does a 4-month Miniature Australian Shepherd weigh?

Usually, Miniature Australian Shepherds weigh about half of their adult weight at four months. This typically means they are about 15-20 pounds. Their gender doesn’t play a role in their weight, so there usually isn’t a size difference between males and females.

However, this isn’t always necessarily the case, as these dogs don’t grow at a predictable weight. Some may only be 10 pounds when they are four months old, while others may be 25 pounds or more.

According to many owners, the dog’s size at this stage isn’t a good indicator of their adult size. Some dogs seem to complete their growth at as young as six months, while others continue growing until they are 1.5-years-old. For this reason, it can be fairly difficult to predict this breed’s weight. They just aren’t as established and tend to be very genetically diverse.

It is a myth that dogs of a certain color will grow bigger than others. Your Mini Aussie’s color or pattern will not determine his size at all.

How big is a 6-month-old Miniature Australian Shepherd?

At this age, this dog’s weight can vary widely. In most cases, they may weigh anywhere from 20-40 pounds. They tend to gain much of their weight before they reach six months, so you should have a pretty good idea of your dog’s final size at this point. Most canines will not gain much more weight than they already have, and you should notice a significant slow-down in their weight gain after this point.

Puppies may appear to be a bit skinny at this point, but this is normal. Most dogs gain height before they gain weight, so it may take a bit of time for their muscle mass and fat to match their height. Dogs will likely be their full height at six months, or at least very close. However, they may need to bulk up a bit, which is where most of their calories will go from this point forward.

At this age, the mental development of a Miniature Australian Shepherd also varies widely. Some may be ending their puppy phase and starting to calm down, while others may act like a puppy for another year. It depends on the genetics involved.

Around the age of 6 months, the dogs will also reach their final ear set. While the Standard asks for Mini Aussies to have floppy ears, their ears can also stand up (like the do in the adorable little guy above!).

When is a Miniature Australian Shepherd grown?

These dogs reach their full weight at anywhere from 9 months to 1.5 years. Usually, a dog’s growth is extremely slow after the 9-month mark, even if they do gain a bit more. Dogs that do continue growing usually only gain another pound or two after they reach nine months. Therefore, you can pretty much assume your dog has reached somewhere close to their adult size at nine months.

While they may be done growing, these dogs will still be developing mentally. They may continue to act like a puppy for some time after they reach their full weight, though some may be ending their puppy stage at this point. Many Mini Aussies only calm down once they are 2-3 years old.

Usually, you can expect these dogs to grow at a decently fast rate. They will almost be their full size at as young as six months. However, because they are smaller dogs in general, they do not grow nearly as fast as the larger dogs out there. They just don’t have as much to gain.

Don’t expect them to remain a puppy for very long, though. Typically, they stop looking and acting like puppies at around six months. However, some may continue their mental and physical growth far beyond this. Certain dogs may grow faster than others, as their genetic pool is quite large.

There is a large variance in weight and growth speed among this breed, so you’re never going to know exactly what you’re getting. For this reason, it can be hard to predict their weight or at what age they’ll be fully grown. Part of this breed is its general unpredictability since it is not well-established. There are actually many ways to make a “miniature” Australian Shepherd. What method the breeder uses will determine the speed that the dog grows at.

For instance, some people refer to the Miniature American Shepherd as a mini Aussie, while other breeds may interbreed Australian Shepherds with smaller dogs to make a miniature version.