German Shepherds are known for being big and imposing dogs. But they aren’t all quite as big as you might imagine. Let us estimate how large your German Shepherd will be as an adult by inputting their age and weight into the calculator below. 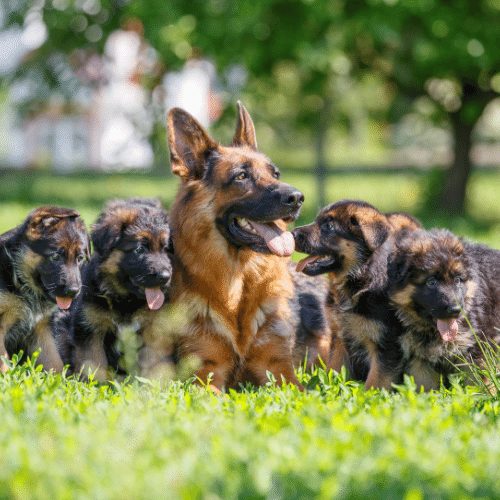 How big will my German Shepherd get?

As you can see, this is a huge range. There is a significant difference between a 49-pound dog and an 88-pound dog. Therefore, how big your particular dog might get depends largely on their genetics. You can often get somewhat of an idea by looking at both of their parents. Typically, if the parents are smaller, their puppies will be as well and visa versa. 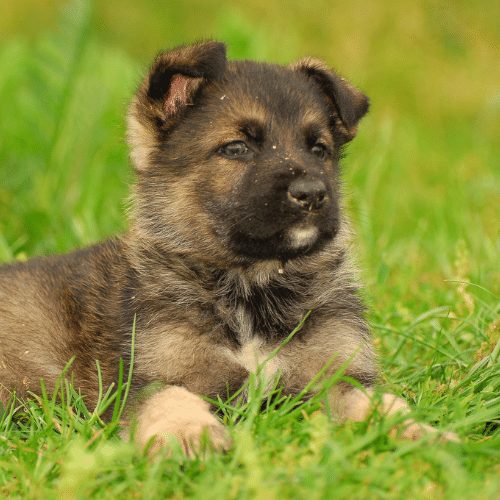 What does a 4-month German Shepherd weigh?

Usually, 4-month-old German Shepherds weigh about 33-40 pounds if they are males and 31-35 pounds if they are females. The size differences between males and females will likely be obvious at this point if it already wasn’t at birth. By four months, it’ll be easier to tell how big your particular dog might get.

At birth, a puppy’s size is largely dependent on where they were in the mother’s uterus, which plays a significant role in their nutrition. Once they are born, genetics tend to take over. At 4-months-old, the puppies have been growing according to genetics for long enough for you to guess what their adult size might be. A dog that is small at this age is likely to remain small.

By four months, a puppy’s development is mostly over. They are simply focusing on growing larger at this point. They should have all their puppy teeth and decent motor skills.

How big is a 6-month-old German Shepherd?

Puppies undergo massive growth spurts before five months. By the time they reach six months, their growth has slowed down considerably. The average male will weigh about 53 pounds, while females weigh 46 pounds. They have not reached their full adult weight yet, but they are very close. Because their growth has slowed down so much, though, they will continue to grow for a long time to come. It just won’t be as fast as it has been.

At this point, your dog’s body is mostly focusing on the looming sexual maturity, which can hit anywhere between 6 months to 16 months. Because they aren’t growing quite as quickly, you may find that they put on more muscle and fat in the coming months. This is normal. It is also normal if your dog retains their somewhat skinny appearance for a few more months to come.

When is a German Shepherd fully grown?

Female German Shepherds often stop growing at around two years. Males may continue to grow for another six months or so. The exact time that each dog stops growing depends on genetics and their diet. You shouldn’t feed a dog extra calories in the hopes that they’ll grow faster or larger. This can make them grow too fast, which can mess up their joints and cause other health problems. In fact, hip dysplasia is much more likely in dogs that were improperly fed as puppies.

Instead, we recommend patience.

Dogs may not grow evenly. Many may reach their full height before gaining much of their muscle mass and fat. Others may “fatten up” for a time and then grow another inch. Dogs are a lot like children in this way. They grow at their own pace.

While these dogs reach sexual maturity before they are fully grown, it is generally not recommended to breed them until they have reached their full size. Otherwise, it can stunt their growth and potentially cause health problems for the mother and the puppies. After all, the mother will be much smaller than she’s supposed to be to carry the puppies and deliver them safely.

Generally, German Shepherds grow rather fast in their first six months of life. They will double their weight many times in this period and undergo many growth spurts. However, after five to six months, it will begin to slow down substantially. While they will almost reach their full size at about six months, it will take them until they are about two to finally gain those last few dozen pounds.

Some owners become concerned when their dog’s growth slows down so much, or they may believe that the dog is full-grown before it actually is. However, their slow growth doesn’t mean they aren’t growing and isn’t any cause for alarm.

Why is my German Shepherd so small?

We recommend that owners of German Shepherds practice a lot of patience with their dog’s growth. German Shepherds all grow in a unique fashion, similarly to people. For this reason, a German Shepherd may not seem to be growing much at all, only to hit a growth spurt. It is also important to understand that there is a large range of “normal” for German Shepherds. Your dog may seem small compared to other German Shepherds while still being in the normal range.

You shouldn’t feed your puppy extra to make them grow bigger or faster. This increases their risk for many health problems, including hip dysplasia. The dog needs to grow at their natural rate.

If you are particularly concerned with your dog’s size, we recommend visiting your vet. They will likely weigh your dog and look at their body condition, which is a better indicator of the dog’s health than the number on the scale. A dog can simply be smaller than normal but completely healthy. If something seems off, your vet may ask to monitor your dog’s growth over a few months to ensure that they are growing appropriately.

Some German Shepherds have been crossed with other kinds of shepherd – these dogs are likely to not grow at the same rate as their pure-bred peers, too.

Do not make the mistake and keep your German Shepherd outside most of the time. These dogs get highly attached to their humans and want to spend time with them! If your dog lives outside and is experiencing stunted growth, he may be refusing food due to loneliness. Make sure to take him to a vet – and in addition, let him spend time inside with you!