The Bichon Shih Tzu is a cross between a teddy and a bear – at least, that’s what it looks like.

Also known as the Zuchon or the Shichon, the Bichon Shih Tzu gives you the best of two popular dog breeds – the Shih Tzu and the Bichon Frise, wrapped up in one irresistibly cuddly canine.

Although the origins of this breed are somewhat vague, what is crystal clear is that the Bichon Shih Tzu combines the loyalty of the Bichon Frise with the playful charm of the Shih Tzu.

Figuring out if this so-called Teddy Bear dog will be accepted into your family isn’t that hard – who wouldn’t fall in love with this bundle of obedient fluff? Having said that there are still some considerations to bear in mind before committing to a life with a Bichon Shih Tzu. 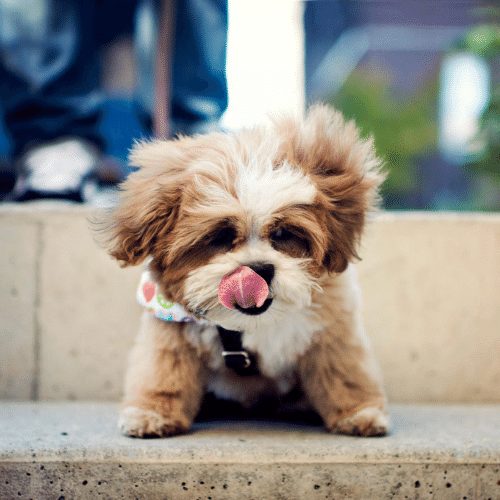 The Origins of the Bichon Shih Tzu

Although the exact origins of this hybrid designer breed are unknown, it’s believed to have first appeared in the US around 20 to 30 years ago. The Bichon Shih Tzu is a cross between the Shih Tzu and the Bichon Frise, both of which were originally bred as companion dogs.

Both parent breeds were favored by the nobility, with the Shih Tzu occupying a special place in the hearts, and palaces, of Chinese emperors, and the Bichon Frise gaining popularity in the European royal courts of the 16th century.

The Bichon Shih Tzu, therefore, is a noble companion dog who’s liable to prove as comfortable in a royal palace as he is in an inner-city apartment.

The Zuchon’s Appearance And Attitude to Life

Descended from the Bichon Frise and the Shih Tzu, there’s no way on earth the Zuchon is going to be anything other than a small, cuddly companion.

Standing around 9 to 11.5 inches tall and weighing somewhere in the vicinity of nine to 18 pounds, the Zuchon is only a little bigger than your standard teddy bear.

There’s a lot of character packed into that compact body, however, making the Zuchon a great companion, family dog, and, would you believe, watchdog!

An energetic little dog, the Zuchon enjoys games of fetch and tug-of-war as much as the next dog but will happily adapt to indoor living, turning the living room into a playground and the bedroom into his favorite place to sleep.

Although you can be sure any Bichon Shih Tzu cross will be small, that’s about as much guarantee as you’ll get regarding its appearance.

As with many designer and crossbreeds, the Zuchon varies widely in appearance, with some sporting curly coats and others the long, flowing locks more commonly associated with the Shih Tzu.

This designer dog also sports a wide range of coat colors, although most are white with flashes of a second color, especially around the ears and eyes. Some Bichon Shih Tzu’s have solid coats in various shades of buff, apricot, and cream, while others will display a mix of three different colors.

The Shih Tzu parent is the one adding the color variations to the breed!

How To Love and Train a Shichon

Like its Bichon Frise ancestor, the Shichon is a low shedder and produces little dander, making it one of the more hypoallergenic breeds around. Although it doesn’t lose much hair, your Shichon will require daily grooming and, potentially, regular trims.

If you suffer from allergies, regular bathing with special shampoos can help keep these under control, although bathing your Shichon more than once a month may dry out their skin, causing discomfort and irritation. Having said that, Shih Tzus, in particular, are prone to being a little smelly, so regular bathing might be the only way to ensure your teddy bear dog remains hug-able.

Owners of both the Shih Tzu and the Bichon Frise find their dog’s grooming regime easier to manage if the dog is clipped regularly, and there are some irresistibly cute hairstyles available to these dogs. If you want to accentuate his teddy bear characteristics, a teddy bear trim is ideal, whereas the lion cut is both chic and low-maintenance.

As with any dog, the Shichon will require regular dental care and nail trimming to keep him in optimal health.

When it comes to training, the early lessons are often the hardest with a Shichon. Like other small dog breeds, the Shichon has a small bladder, making potty training rather challenging. If you’ve had any experience potty training a stubborn puppy, you’ll know how frustrating it can be.

Although the Shih Tzu’s stubborn streak is counterbalanced by the Bichon Frise’s willingness to learn, you’ll need to take things slowly. You might want to consider introducing crate training as soon as your Shichon gets home and then use these handy tips and techniques to move onto the next level.

Once the initial training phase is complete, positive reinforcement methods can turn your teddy bear dog into a trick-performing superstar. The Shih Tzu’s natural intelligence, combined with the Bichon Frise’s desire to please, make them easy to train. As a result, “they are well-suited for obedience training, learning tricks, and can even shine in agility and obstacle courses.”

How To Keep Your Bichon Shih Tzu Healthy

This is true of the Bichon Shih Tzu, which is generally a healthy breed that’s less prone to the problems seen in either of its parent breeds. Even this remarkably sturdy designer dog is prone to a few of the health problems that affect its parent breeds, namely:

To keep these and other diseases at bay, you need to adopt a regular exercise and grooming regime and take your Bichon Shih Tzu to the vet for regular check-ups. 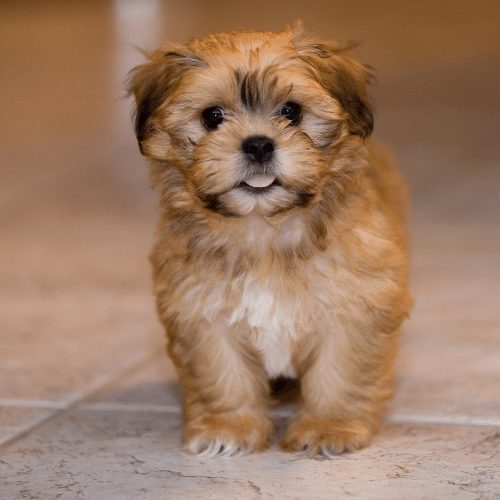 The Pros And Cons Of Life With A Zuchon

Life with a Zuchon is primarily full of fun and love. These low-maintenance small-breed dogs fit in easily to almost any environment, happily adapting to apartment living and family life. There are a few issues that can arise, however.

Families or individuals that spend a lot of time away from home should think twice about getting a Bichon Shih Tzu as they are prone to separation anxiety.

Although the Bichon Frise copes better with being left alone, as a companion dog, the Shih Tzu needs constant attention, and leaving him alone for just a few minutes could result in unwanted behavior like incessant barking, chewing, urinating, or defecating in the house.

Bichon Shih Tzu owners love the fact that these small dogs are:

Zuchons are mostly easy dogs to live with, but they do:

If you can’t fulfill these needs, you’re better off looking around for a small dog breed with a more independent spirit, like the Chihuahua or Boston Terrier. 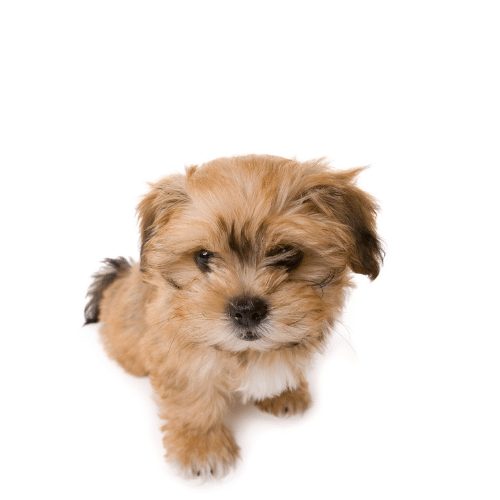 Find Out More About The Bichon Shih Tzu – FAQs

What is the life expectancy of the Bichon Shih Tzu?

The Zuchon has a similar life expectancy to that of its parent breeds, and you can expect to enjoy a good 10 to 16 years of furry companionship with your Shichon.

One Shih Tzu, named Smokey, enjoyed the Florida lifestyle for 23 years while the oldest known Bichon Frise died at 21.

A good diet and regular exercise will help your Zuchon live a long and happy life.

Zuchons are generally friendly dogs, although they can be quick to nip, especially as puppies.

According to some, “all teddy bear puppy breeds have the natural instincts to become aggressive,” but there’s little evidence of this in the Zuchon. Nevertheless, correct handling goes a long way to ensuring your Zuchon doesn’t develop any aggressive behavior.

These teddy bear puppies are so cute it can be tempting to cuddle and pet them even when they’ve behaved inappropriately. Unfortunately, to your Zuchon, that means you approve of his behavior, which will encourage him to repeat it.

To make sure your Bichon Shih Tzu doesn’t develop any aggressive behavior, resist those puppy-dog eyes and ignore him when he behaves badly, only giving him attention as a reward for good behavior.

How much do Shichons cost?

Hybrid breeds are often cheaper than their purebred parent breeds, but that rule doesn’t appear to apply to the Shichon.

A Bichon Frise puppy usually costs somewhere between $700 and $2000, whereas a Shih Tzu costs around $1,200 from a registered breeder and up to $3,000 for “dogs with exceptional pedigrees.”

Experts suggest you should budget at least $600 for a Shichon puppy, but the ones currently available appear to sell for a minimum of $2,000! You may have to part with as much as $2,950 for a particularly well-bred Bichon Shih Tzu, but that’s a far better option than buying a sub-standard dog from a backyard breeder.

Lovable and easy to live with, Zuchons rarely end up in rescue centers but, if you’re lucky, you might find one to adopt just remember that this option isn’t free either, and you’ll probably need to hand over an adoption fee of around $350 to $500.

Shih Tzu Bichons aren’t excessively noisy dogs, but they will bark to let you know that a stranger has arrived or an intruder’s in the yard. It’s nothing like the Chihuahua, however, or the Pomeranian, both of which have big personalities and loud and insistent voices.

Do Shichons Have a Strong Prey Drive?

The Shichon has virtually no prey drive or hunting instinct. Bred purely as companion dogs, they’re extremely adaptable, happily living with humans of all shapes, sizes, and ages, and mixing well with other pets.

Their natural curiosity means they socialize well, although care must be taken when introducing your teddy bear puppy to larger animals that may respond to his enthusiasm with rough play that could cause injury.

Bichon Shih Tzus love attention and will greet friends, and even passing strangers will love and enthusiasm. If you’re throwing a dinner party, expect your teddy bear pup to be the star of the show, demanding attention and love from all your guests.

At What Age is a Zuchon Full Grown?

Like most small dogs, Shih Tzu Bichons usually reach full height by around six to eight months of age but will continue to fill out and add weight for a couple more months after that.

It’s worth noting, however, that some Shih Tzus continue growing “until fifteen months and small weight gains can be made up to age two years,” and the Bichon Frise usually reaches his full size after 12 months.

As cute as a button, cuddly as a teddy bear, and endlessly entertaining, the Bichon Shih Tzu makes a great companion for the elderly, fits easily into family life, and doesn’t mind living in small apartments.

They’re healthy, friendly, and entertaining little dogs that are generally easy to train and low maintenance. The only thing a Shichon really can’t stand is being left alone so, if you’re thinking of introducing a teddy bear puppy into your life, make sure you can give it the attention and companionship it needs.

Zuchons, like teddy bears, are versatile creatures, willing to go everywhere and do everything, as long as they can be with their human companions. 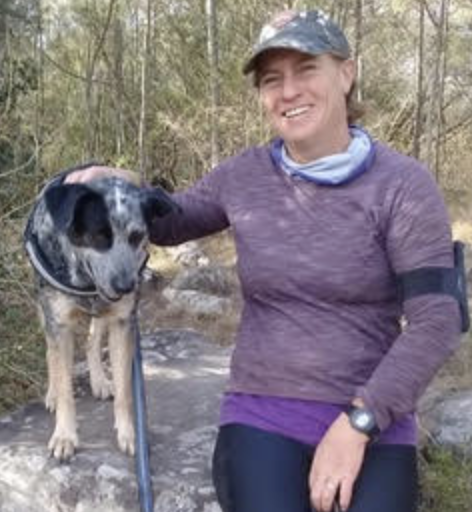 Nicky lives on a small-holding on South Africa’s Wild Coast with a selection of animals, a husband, and five dogs. She spends all her waking hours with her Australian Cattle Dog, Koala, either walking, horse-riding, running, or just hanging out.

Originally from the UK, Nicky been living with dogs for over 40 years and is a passionate dog-owner.

With a Masters Degree from the University of London under her belt, Nicky has had a diverse career, training and riding horses, running safari lodges, and hosting volunteers. She’s now a full-time writer.