Should I Let My Dog and Cat Fight?

Should I Let My Dog and Cat Fight?

In short, no. This can lead to all sorts of problems. Most obviously, fights can result in injuries. In a fight against a dog and a cat, it is usually the cat the turns out injured. However, this is not always the case. Some dogs may become injured as well, especially if they are smaller or have eyes that are stick out a bit further (think Shih Tzus).

Furthermore, letting your dog and cat fight only makes this behavior normal. Dogs and cats are creatures of habit. If they start their relationship out by fighting, then they are likely going to keep fighting. They won’t sort out their differences; they will simply learn that fighting is how they should interact with each other. Most people assume that the cat and dog will get used to each other eventually, but this is often not recommended. 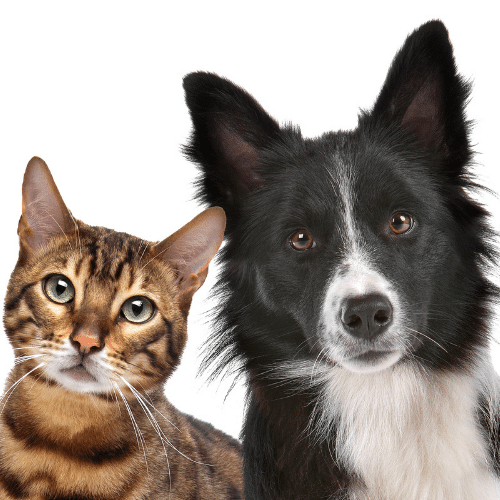 Should I Intervene When My Cat and Dog Fight?

Yes. You should absolutely intervene when your cat and dog start fighting. Physical aggression is not how cats or dogs settle their differences and get used to each other. Letting your animals fight will not teach them how to get along. That simply isn’t how it works.

Instead, fighting will lead to injury in the short term. Most of the time, the injury won’t be terrible. However, if there is a significant size difference between a dog and a cat, it could be catastrophic. A dog over 30 pounds may easily be able to kill a cat if the feline doesn’t get away fast enough.

Fighting is also likely to make one party more afraid of the other. Usually, it is the cat that becomes more frightened of the dog. However, if your cat happens to be much larger than your dog, the opposite may be true. This occurs most often in small breed puppies, where the cat is often much larger than the dog. Fear often leads to more aggressive behavior in animals. They are more likely to feel threatened by the other animal if they are scared of them.

One of the ways animals deal with feeling threatened is by acting aggressively. This will likely only lead to more fights. This is especially true if the threatened party has difficulty fleeing the area. This can occur with larger dogs and cats, as the dogs are typically able to overpower the cat easily. It can also occur with cats and puppies since the puppy isn’t nearly as strong or fast as the cat. The scared party may simply attack the other one.

Allowing your animals to fight also makes the behavior habit. It teaches your animals that this is exactly how they interact with each other. If they don’t know any other way, you can’t expect them to suddenly start getting along. Both cats and dogs have to be taught how to interact appropriately with each other. Typically, this is done with socialization at a young age.

By introducing your puppy to many different cats and your kitten to many different dogs, you help them learn how to interact with the other species. You socialize them, in other words. This also prevents fear, which is a common driver of aggression and fighting. 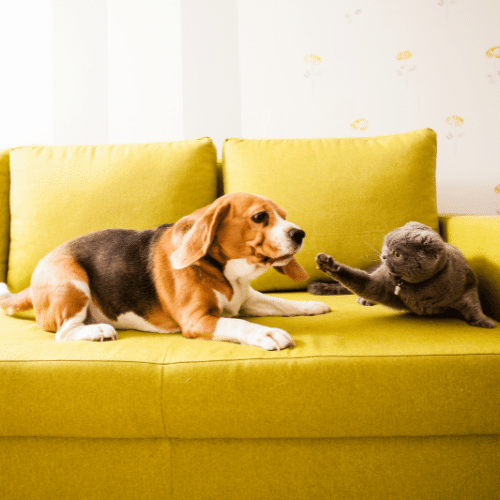 How Do You Intervene When a Cat and Dog Fight?

Of course, how you intervene can also be important. You don’t want to simply grab one of the animals, as this can lead to injuries for you. When claws and teeth are flying, it is often difficult for animals to properly aim if you just start sticking your hands in the middle.

Preferably, if you know your cat and dog fight, you should keep them separate. Preventing fights is often the best way to “intervene.” If your dog and cat aren’t allowed to fight, then you’ll have fewer fights to intervene in.

If your pets are already fighting, you have a few different options. You can try making a loud noise. Some animals respond best to yelling in this situation, but others will just ignore you. If your pets fall into the latter category, try a loud banging noise. You can also put a bunch of coins in a bottle and shake it. The point is to catch your pet’s attention so that the abused party can get away.

Of course, this is assuming that your pets have somewhere to get away to. If they don’t, then this likely isn’t going to work. Your cat should have high places they can climb up, putting them out of reach of the dog. Puppies will likely be able to hide under things if the cat is the aggressor. You can also swoop in and pick up the fleeing animal after breaking the fight up with the loud noise, assuming you don’t have a large dog that may jump on you in an attempt to get the cat.

You can also use the “wheelbarrow” method, which involved picking up the dog’s two back legs. This allows you to remove the dog effectively from the fight without being injured yourself. The cat will typically run away once the dog is forced to disengage. This is extremely effective when the dog is obviously the aggressor. Cats typically won’t continue fighting when they are given an opportunity to run.

Once the fight is broken up, you should be able to remove the dog from the situation. This is often much easier than trying to remove the cat, as the cat will likely not enjoy being picked up after a fight. Their claws can make them difficult to remove safely and effectively. For this reason, we recommend removing the dog instead.

Will My Dog Kill My Cat?

He absolutely could. Obviously, if your dog is smaller, the chance of this is much lower. A cat that is heavier than the dog is likely not going to be seriously injured, especially if they can get away from the dog if needed. However, if you have a large dog, then it can likely easily kill your cat if given the opportunity.

For this reason, it is important to keep your cat and dog separated until they are no longer fighting. If your dog and cat can’t be trusted around each other, then they shouldn’t be left alone. Be sure to introduce your pets in a calm and safe manner. Typically, this means going very slowly. You don’t want to give them both free access to each other on the first day. Instead, you should plan on slowly introducing them over a period of days or even weeks.

It is important to remember that cats can also kill dogs in some cases. This is most common with puppies, which are small enough for some cats to serious damage. However, this is much rarer than dogs killing cats. 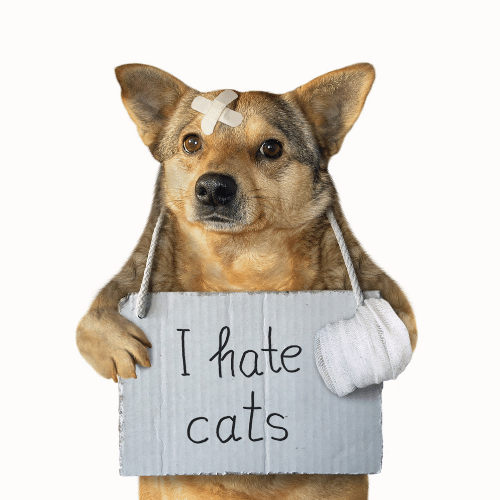 Typically, a cat is not going to mistake a puppy as a prey animal. Therefore, their prey drive will not activate, and they usually won’t try to “hunt” the puppy. On the other hand, many dogs see cats as prey animals. Therefore, they may start chasing the cats in an attempt to hunt them. This is when you have to start worrying about injuries since the dog typically won’t know that they’re doing anything wrong.

What Dog Breeds Are Not Good with Cats?

Any dog breed with a high prey drive usually won’t be good with cats. They’ll see the cat as a prey animal and attempt to hunt them. This isn’t something that you can really socialize out since it’s an innate drive. Any dog that was made to chase something is typically not going to be a good dog for your cat since they’re likely going to try and chase your cat.

You should be especially careful with:

You should never let your cat and dog fight. Preferably, you should introduce them in a way that makes it impossible for them to fight. Typically, this means going very slowly and keeping them separate until they can be trusted together. This will likely take days or even weeks, so be prepared if you’re adopting a new pet.

If your cat and dog do start fighting, break it up as quickly as possible. This can be done in a variety of ways, including making a loud noise and using the wheelbarrow method. Dogs can severely injure cats, so it is important to ensure that they are fighting for as short of a time as possible.

Cats can also harm dogs, but this happens far less often. In most cases, the cat is simply trying to get away from the dog.

Like you might expect, the best way to keep your pets from fighting is to prevent them from fighting in the first place. Prevention is the best strategy in this situation.