So you decided on crate training your puppies – let’s get started! But before you rush into the training process, make sure that they both have their own crate. In my career as a dog trainer I get asked so often “Can two dogs be crated together?” The answer is always no – you should never crate two dogs together (especially adolescent or adult dogs).

Today we will discuss why crating two dogs together is a poor choice and what consequences may arise from it. 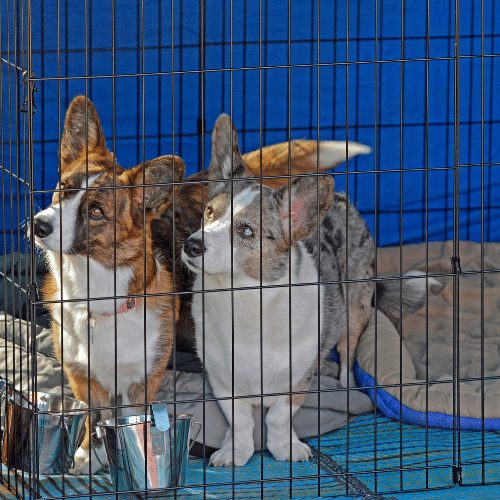 Can you put two dogs in one crate?

No – you should never put two dogs in one crate. It does not matter how well they get along or if they are siblings or littermates. A crate is way too small of a space. No two dogs should ever be forced to share it. In fact, even dogs that get along well may reach an escalation if forced to be crated together!

A dog’s idea of “personal space”

Dogs cannot use verbal language like us humans to communicate. All communication happens through body language. Dogs have many different options to make use of this – from the way they carry their tail over the position of their ears to whether they sit, stand or play-bow. Their body language rarely happens when they are static – nearly always dogs are moving around to send messages to other dogs. Dogs are not as touchy-feely as humans are. While we enjoy hugging our friends, putting our hands on their arms or patting their shoulders, even dogs that like each other often choose to never touch. They like to keep a distance of a couple feet between them.

(Any kind of breed that was developed to have a keen sense of spatial pressure, such as herding breeds, are especially aware of this and often strongly dislike touching other dogs)

When you put two dogs into one crate, you are essentially messing up their entire communication. They cannot use their body language and move around as they usually would. Restricting them to such a small space can make them feel combative and the only way they know to defend their personal space is by lashing out at the other dog. 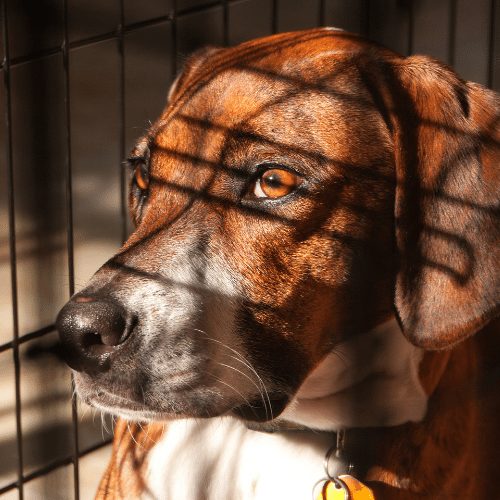 Crating two dogs together to make them get along

You should absolutely never crate two dogs together in order to make them “get along”. Do not put two dogs that are reactive or aggressive towards each other into the same strong crate and hope for the best. This could quickly lead to a devastating fight and potential severe injuries in both pups. If your two dogs show any kind of reactivity or aggression, you need to use targeted reactivity training to counter this. Putting the two dogs into the same crate is never a solution!

When can you put several dogs into one crate?

A notable exception for putting two or more dogs into one crate are very young puppies. During the first 8 weeks of their life, they are constantly surrounded and touched by their littermates. Very young pups do not yet have the sense of personal space that adult dogs have. Many breeders choose to transport and crate train their puppies by putting several into one crate. This will work well and actually often is the only realistic way to transport a litter of puppies. (Think of a litter of e.g. Great Danes – they often have 10+ puppies – thankfully they do not need 10+ individual crates.)

Can you put two dogs into a playpen?

A playpen is a different story. It allows the dogs much more space than a crate. If you have a large playpen and two small-breed dogs that get along well, you can absolutely put them into the same pen. They will have enough space to use their body language appropriately and not be restricted. Of course, you should have separate beds in there for them and only use it as a management tool. (No dog can live in an exercise pen for most of his life.)

Crating two dogs together in the car

If you have a smaller car that can only accommodate one crate, you might be tempted to crate two dogs together in the car. Again – this is not a great idea. Especially if your dogs react to something outside (such as a dog barking, other cars passing by or the sound of a siren), they could redirect this excitement and stress and leash out at each other. Only if your two dogs are very small and the crate is rather spacious should you consider putting them both into the same car crate.

It is never a good idea to crate two dogs together. The only exception is if they are young puppies under 8 weeks of age. If your dogs are adolescents or adults however, do not put them into the same kennel. This could result in a serious fight between them with potentially severe injuries.

This does not only apply to crating them at home, but also in the car. Lack of space is never a reason to put two dogs into the same crate.

This is different if you have an exercise pen instead of a crate. Exercise pens allow dogs to move around much better and enable them to use their body language to communicate. If you have two dogs that get along well (especially if they are small dogs and your playpen is big), it is ok to have them in the same pen for a few hours. 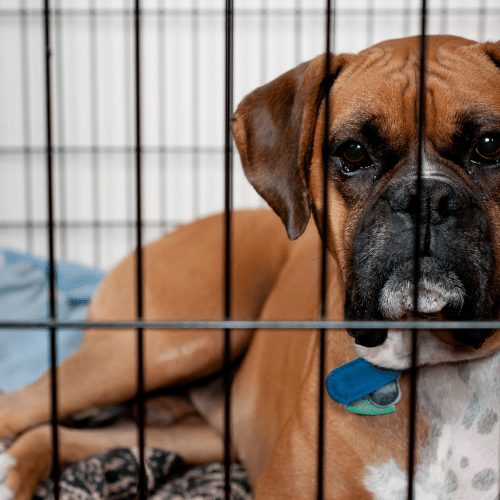